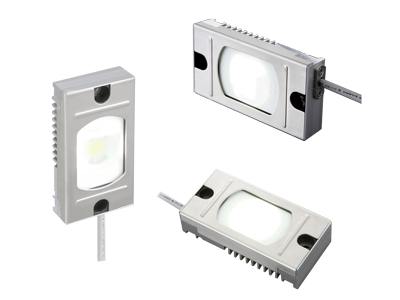 Delay in finding chatter marks impacted the next processes
A machine designer at machining center at a machine tool manufacturer who takes pride in its high precision mentioned that lately, more and more sales people from the company and also the support departments ask him about the rigidity or reliability of products. According to them, chatter marks become visible after only a few operating hours have passed, and more users send them complaints or demand to find the cause of the problem.
As he investigated the cause, he found that the glares from LED lighting inside the machine tool tend to be seen as chatter marks while visually checking the machine operation. He thought that users probably missed chatter marks because of such tendency, and because they missed and the chatter marks were left untreated, maintenance was delayed and the situation worsened. For this problem, IDEC provided a solution to enable anybody identify chatter marks at a glance. What was used to solve the situation?

LED lighting inside machine tool allows for clear identification of chatter marks
Standards such as ISO23215, JIS B6031, and EN 1837 stipulate that illumination inside machine tools must have 500 lux luminance. We analyzed how the light inside the panel shone. The conventional illumination cleared the requirement of 500 lux or higher luminance. However, each of lined-up LED elements emitted light individually, and the light shone unevenly, creating uneven patterns. It was found that this made it difficult to identify chatter marks.
IDEC proposed the One-Core LED LF1D−C Series to the customer. LF1D−C is flat illumination capable of emitting light to the surface evenly, which is perfect for illumination inside a panel. Using LF1D−C to shine light on a piece of work made it possible to check whether chatter marks have been generated or not easily, at a glance. The customer was surprised and thanked, saying “it is great that the product has light distribution capability to light machined surfaces so nicely. This must be useful for visual checking. We would definitely like to adopt this product as illumination inside machine tools for other machining centers.” 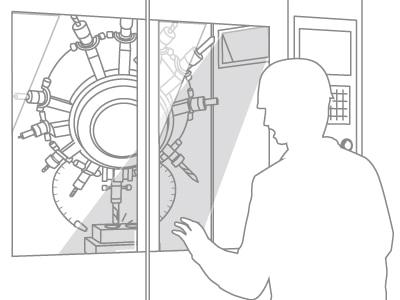 Various control product line-up to solve problems at production sites
IDEC has not only LED illumination inside machine tools, but also control products and safety products such as PLC, HMI, pushbuttons, pilot lights, relays, interlock switches, emergency stop switches, enabling switches, safety laser scanners, and safety controllers. IDEC has trust and experience for safety with the most number of safety assessors in the industry. We can give you consultation on overall safety solutions on manufacturing sites, not only on safety products. Please consult with IDEC if you have any problems at production sites.