Use of robots operating at low speed does not increase efficiency
The trend in production lines whose production volumes fluctuate daily, such as the metal parts machining processes at automobile factories, is the increasing use of human-robot collaboration. Although sudden changes in production amounts can result in an excess or deficiency of workers, replacing workers with robots can eliminate wasteful labor costs and prevent production volume shortages. However, there are safety concerns in relation to such human-robot collaborative work. One countermeasure is to operate at low speed in order to maintain the safety of workers when there are no fences. However, since operating robots at low speed does not really improve productivity, there were previously no benefits from introducing high-cost robots in such cases.

As industrial robot manufacturers found out about these types of conditions at production sites, they became concerned about whether they could develop robots capable of working in environments where humans are present while maintaining both safety and productivity.

Human-presence sensing scanner contributes to both productivity and safety
How can we increase productivity while also maintaining safety? With our many years of experience in resolving production-site issues, IDEC recommends use of a system that changes robot operating speed when human presence is detected.

By using IDEC's SE2L Safety Laser Scanner together with collaborative robots, robot operation can be switched to low speed or make it stop when human presence is detected. Operation is performed at high speed if no human is nearby in order to allow robots to operate with maximum productivity. You can also set operation to change to low speed or stop according to the distance of the detected human. For example, you can set it so that operation changes to low speed when a human is detected within a three meter radius and operation stops when detected within a one meter radius. This provides flexibility of use to match the corresponding production process. 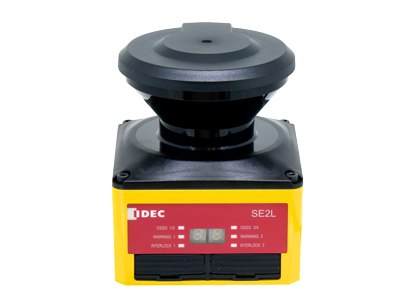 Please feel free to consult with IDEC about safety measures for human-robot collaborating environment
As safety specialists, we at IDEC are dedicated to ensuring safety in a wide variety of production sites. We are using the experience and know-how we have accumulated over many years to focus on collaborative safety at production sites with human-robot collaboration in order to provide a wide variety of corresponding safety products. Please contact IDEC if you have any questions or concerns regarding robot safety so we can propose how you can increase productivity while also maintaining safety.