The demand for low profile automatic guided vehicles at production sites is increasing
Automatic guided vehicles (AGV) are often used to automatically transport objects inside factories. Recently they are increasingly being used to transport products between processes instead of conventional belt conveyors, and their use is expected to further increase into the future. Among the various types of AGVs, low profile models with a flat upper surface that is low to the floor are being used for a wide range of applications such as transporting baskets of various sizes and pulling trolleys. We expect that demand for these types will continue to rise.

Although AGV manufacturers are carrying out extensive R&D to deliver low profile models to their customers, they are facing the particularly tough problem of developing models that have a low profile without sacrificing safety and practicality. In order to notify surrounding workers of the AGV operating state, conventional AGVs generally were equipped with devices such as tall signal light towers, buzzers, and speakers that could reliably alert workers even when the AGV was fully loaded.

However, when designing vehicles with strict height limitations, it is difficult to install vertical signal towers. Even if installed to the front or rear of the vehicle, it ends up blocking the installation of other components such as emergency stop buttons, or the lamps may become difficult to view. This causes various safety and design problems.

This has been a problematic issue for AGV manufacturers who want to fulfill customer requests for low profile vehicles without sacrificing practicality and safety. 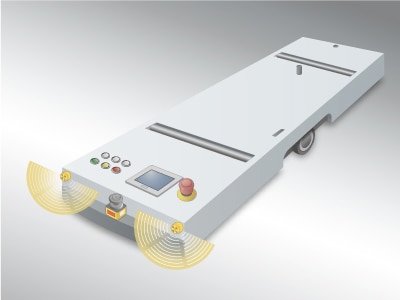 IDEC has worked on a solution to the problem. Instead of using conventional signal towers, this solution involves installing an HW1Z illuminated buzzer on the front of the AGV to alert surrounding workers using both light and sound.

By attaching it to the front of the vehicle, it emits light and sound in the direction of travel. This ensures that surrounding workers are reliably notified and maintains a sufficient level of safety.

Having a small diameter of 30 mm, the HW1Z allows the vehicle to have a low profile and ensures practicality. This is not possible with conventional signal towers. As the HW1Z can be wired by push-in terminals which eliminate the need for tightening of screws, it can be used for AGVs where terminals may become loose due to vibration. As the demand for AGV is expected to increase, users will demand for AGVs that are more compact and lower to the floor. This will further increase the need to miniaturize components.

The HW1Z will not only satisfy future demands, but will reduce costs and labor due to its ability to be installed in any 22mm hole. Therefore, this solution will be beneficial to AGV manufacturers and users alike. 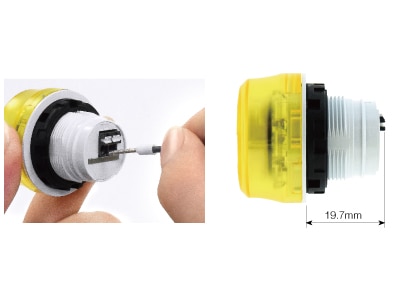 A wide range of products suitable for various AGV designs
IDEC also offers a range of products that contribute to adding value to AGVs other than pilot lights.
For example, despite its compact 4.3-inch display size, the HG1G programmable display is equipped with FTP server functionality that allows the transfer of files. Simply by connecting to a network, maintenance and updating of the screen can be done remotely, improving production site efficiency.

We also have a comprehensive lineup of switches such as control switches and emergency stop switched in various sizes and designs for a wide range of applications. We will provide you with the best solutions.