In TAB processes where LSI and flexible circuit boards (TAB tape) are bonded, the protective film is removed from the TAB tape before bonding. When the film is removed, the film may rip due to abnormal tension, etc. To prevent the machine from continuously producing defective products, the sensor plays an important role in this process to detect whether the film is infallibly removed and stops the machine in case of an error. However, transparent films are not easy to detect. Most machine manufacturers usually use high performance ultrasonic sensors to ensure accuracy. Although general-purpose photoelectric sensors can be used in order to reduce cost, the question of detection performance remains. TAB machine designers may have issues in responding to the needs of manufacturing floors to keep equipment costs down while improving performance at the same time.

With unprecedented performance compared to conventional photoelectric sensors, the SA1E-X can be used in a wide variety of applications
IDEC SA1E-X miniature photoelectric switches differ from most general photoelectric sensors which have a non-coaxial structure, which means they do not have a blind zone that cannot be detected. As objects near the sensor can be detected, it can be used in small equipment and where space is limited. While it can detect a long distance of up to 2m, the response speed is fast, at 500μ seconds. It can be used in a wide variety of designs and applications, and not limited to LSI manufacturing equipment. If you have any questions or would like to know more about other uses, please contact IDEC. 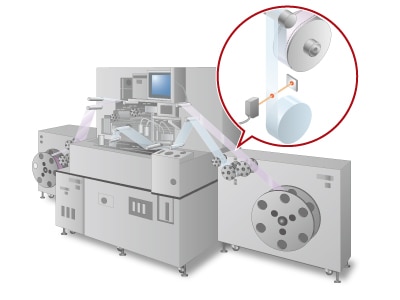 Reduce total cost with high-performance compact code reader
In conventional designs, code readers installed on load ports had limited installation flexibility. In addition to having to purchase additional parts used to adjust the reading angle, it also took a lot of time to set it up at the correct angle. There were also many semiconductor manufacturing equipment load port designers who thought that it was important to reduce the total cost including the code reader.
In response to this, IDEC introduced the WB2F 2D code scanner capable of reliably reading codes at an angle. Just 24mm x 40 mm x 32 mm in size, the compact WB2F is equipped with a high resolution 1.2 megapixel CMOS image sensor can read small symbols over a wide area. It can be easily integrated into small devices.
In addition to the auto-tuning function that reduces overall adjustment time, this model is also equipped with an image storage function that reduces the amount of work required when there is a reading error. This allows excellent traceability while keeping costs low.

Ideal for semiconductor manufacturing applications in addition to load ports
The WB2F 2D code scanner is capable of reading codes even from distances up to 150 mm. It is also compatible with various types of barcode and 2D codes.
Therefore, it is possible to read codes installed in various locations and can be used in a wide range of applications such as with FOUP enclosures holding 300 mm wafers, cassettes holding 200 mm wafers, and wafer frames that prevent damage.