Dropped workpieces could not be detected in a timely manner
In a large number of food processing and cosmetic production facilities, palletizing robots are used instead of humans to pack products into boxes. Palletizing robots with inbuilt safety measures are responsible for improving production efficiency and eliminating the problem of labor shortages at production sites.
However, these robots are poor at handling small, light, and slippery objects which are often dropped during pickup and transportation. For some objects with particular shapes, there are cases where robot incorrectly drops several pieces out of a 100 pieces. Therefore, box packing area mat sensors can be used to detect dropped objects and reduce the risk of packages having insufficient quantities of products.
When the sensor detects a falling object, the worker usually picks it up and places it in the appropriate cardboard box. However, mat sensors have the inherent weakness of not being able to reliably detect light objects. This means that even if an object drops down, the worker may not be notified due to the mat sensor failing to be triggered. In such a case, insufficient quantities of packaged products are not discovered until the inspection process. This places a heavy burden on the person in charge of inspection. 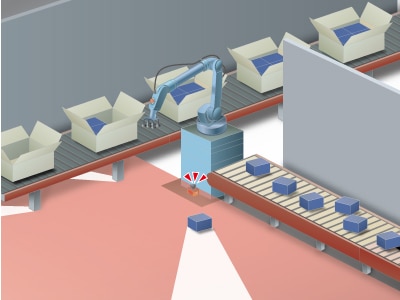 In order to properly detect falling objects and enable workers to respond immediately, IDEC recommends using the SE2L safety laser scanner instead of mat sensors.
The SE2L safety laser scanner has a detection range of 270 degrees within a distance of 5m. It can reliably detect falling objects regardless of their weight or size.
Furthermore, as a worker approaches a palletizing robot, it is also possible to automatically decelerate or stop the robot according to the distance. This contributes to both safety and productivity while preventing injury or death.
Some customers may be concerned about increased costs associated with the extra functionality. However, because a single unit is capable of covering multiple work areas at once, this means that overall costs are reduced due to eliminating the need to install multiple mat sensors. 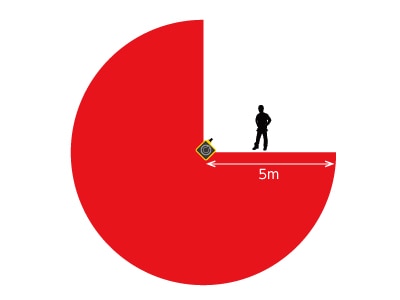 Contact IDEC if you have any concerns regarding improving production site productivity and safety
In addition to the SE2L safety laser scanner, we also provide a number of solutions to increase workplace safety.
We have a comprehensive lineup of safety equipment including the LH1D surface mounting indicator lamp that lights up to alert the user of the robot operating state, the FS1A safety controller that allows easy construction of safety circuits via simple logic selection and eliminates the need for programming skills, the HS5L interlock switch with solenoid for safety fence applications, and the RF1V force guided relay for use in safety circuits. Please contact IDEC for more information regarding ensuring worker safety and standardization practices for safety construction.