New keyword for human-robot collaboration
"Collaboration" between humans and robots is rapidly becoming a keyword for improving productivity at production sites for automobile manufacturing.

"Although the current trend is to automate all production processes so that robots perform the work previously done by humans, there are still some processes that are difficult for robots to perform. Although robots are great for simple work, transporting heavy parts, and similar tasks, human workers are still more appropriate for tasks requiring careful attention such as installing seats. Accordingly, the idea was born that dividing the work procedures between humans and robots would serve to improve productivity. However, this results in the issue of ensuring safety.
Although safety is conventionally maintained by the installation of safety fences to keep robots and humans separated, collaborative work cannot be performed unless the safety of work environments without fences can be ensured.

Collaborative work where robots can be moved according to human intent improves productivity
There is a way to maintain safety while maximizing the benefits of automation.
IDEC recommends using our Enabling Switches in order to perform safe human-robot collaborative work. Use of enabling switches allows you to create a system in which a robot moves only when lightly pushed in an intentional manner by a human. The robot stops when the operator's hand is removed due to a spontaneous movement when there is some imminent danger to a person, or the operator grips tightly due to some perceived danger or similar circumstances. This means that the robot only moves while consciously being moved by a person in work environments using enabling switches in order to maintain the safety of workers near the robot. Additionally, you can install safety laser scanners to the robot to serve as presence detection sensors so that high-speed operation can only be performed when no workers are in the operating range of the robot.

Taking the example of the process for installing seats to a car body, a robot can rapidly move the heavy seat to near the installation position and then stop right next to the car body. Next, the worker can securely install the seat to the car body while pressing the enabling switch of the hand guide device installed to the tip of the robot arm. Use of enabling switches on hand guide devices in this manner allows for smooth operation in multiple processes and further improves efficiency due to automation. 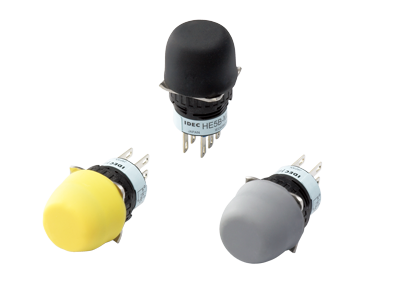 Select the enabling switch that matches your desired use from our large and varied lineup
In addition to IDEC enabling switches being compliant with international standard IEC 60947-5-8, they have been designed for safety with full consideration of ergonomics. Select the product to match your work environment from our large and varied lineup. We can provide suggestions and consultations regarding not only enabling switches but human-robot collaborative work as well. Please feel free to contact us for any questions or concerns regarding these topics.